“My name is Katie Brown and I am a British Citizen, my Partner is Eric Boateng and he is Ghanaian. We have a son together who is 2 years and 7 months old, called Kayden. 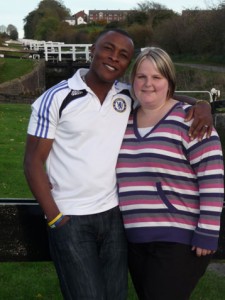 Eric and I have been in a relationship for just over 6 years and we have been living the life of worry, fear, heartache and upset due to Eric’s Immigration status at the time, this was for a whole 6 years however Eric has been in the UK for 10 years. He came on a Visitors Visa and eventually was classed as an overstayer.

We feared for our relationship and attempted to sort things out on so many different occasions but the fear and shear worry of him being deported just wiped away any motivation to sort his Immigration status. I travelled to Ghana to meet Eric’s family, without him, in 2008. We looked at getting married in Ghana and also the UK, but every corner we took, there was doubt that he would get caught up with and we would be separated.

I enquired with Global Immigration Solutions back in 2010 when I spoke to Keith, he advised me what I needed to do but we still felt so worried. I also contacted several other Immigration Lawyers who I found were double the price, if not more and would not discuss your case with you more than a very brief explanation of what needed to happen. I did not feel happy with the others at all.

I fell pregnant and the worry became more as this now meant that Eric could be separated from his Son too. I decided that the time felt right to get things moving.

I rang back Global Immigration Solutions and got through to the lovely Asha Thomas. WOW is all I have to say, this lady is an absolute inspiration and took 40 minutes out of her busy day and spoke to me on the phone, listening to what the situation was, advising me what I needed to do and the options that we had, she also sent me details of the call summarising what she had discussed with me and what I needed to do next.

This was without any payment, just free initial advice. So Human and so to the point, no beating around the bush which is what you need when you are in a very risky and difficult situation. Asha assured me she would be with us all the way but never ever once gave us false hopes to gain our money or case.

I sent our Documents to Asha early July 2013 and the Representations were written and sent to me for approval and the whole Application was with the Home Office by 15th July 2013. Asha kept in touch with the Biometric appointment letter which we completed early August 2013 and were prepared for a very long drawn out process as we submitted a Human Rights Application, we were also expecting to have to Appeal the decision and end up in court. Asha advised us that this could happen, again, no false hopes and Asha set our expectations right from the beginning.

Asha rang me on Monday 9th September 2013 and this call changed our lives forever. She had rang to tell me that Eric had been granted Leave to Remain, which we do have to renew every 2 years and 6 Months for the next 10 years. I could not believe what I was hearing, it was exactly 7 weeks from start to finish. This is outstanding, 7 weeks to go from an overstayer to having status, it is totally incredible.

Asha Rocks and her representations were out of this world, she put such a good argument about our Human Rights and there was just no way they could argue it. Thank you Asha, you have really made such a difference to our families life. It may be your Job but the way you do your ‘thing’ is just WOW!!!!!

Global Immigration Solutions is the resolution to your Immigration problems and at such an affordable price.. See you again in 2 years time Asha.”